Were the Founding Fathers Liberal? 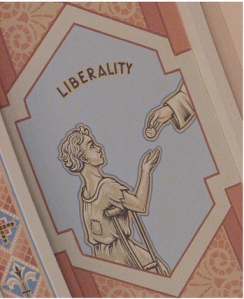 When America was 225 years younger than it is today, there were no liberals and no conservatives. And there was no liberalism and no conservatism. Such terms, and the clusters of political views they represent, were unknown in America at least through the era of the Civil War and Reconstruction. How Americans eventually divided into liberals and conservatives, and how liberalism and conservatism came to represent distinct political worldviews, are questions too big to answer fully in this tiny blog space. But we can make some headway by looking at the word “liberal” as it was understood in the era of America’s founding.

At that time, “liberal” was almost always used in a positive sense and almost always referred to the virtue of liberality. A person was liberal not by having a particular set of political beliefs but by possessing this particular virtue. Following the ancients, especially Aristotle, Americans understood liberality first as the virtue of free and rational generosity. Liberality was the capacity to give of one’s own free will and to give with purpose–in the right way, at the right time, for the right end. Giving that lacked these qualities was not virtuous. Bestowing a hundred dollars cash on a homeless alcoholic, for example, would not be an act of liberality. It would be an act of prodigality–a vice, not a virtue.

For Americans, liberality also referred to a quality of intellect. A liberal person in this sense is broad-minded, open to reasoned argument and to new evidence. A liberal person views truth as growing, developing, and inclusive, not changeless and exclusive. A liberal person can think and plan on a large-scale–can apply big solutions to big problems. He or she does not shrink from such a task but relishes it.

In these eighteenth-century senses of “liberal,” the Founding Fathers were, indeed, liberal. The Constitution itself was an act of intellectual liberality. Its framers deliberately set out to craft a new national government. They did not give in to the temptation to blow up the project as too complex for human reason. And their invention of federalism–the division of power between one central government and multiple state governments–revealed their openness to thinking in new directions in light of a virtually unprecedented political situation.

I also believe the founding generation was liberal in the other sense. They were generous.  Both at the federal and state levels, the first holders of public office in the United States did not stingily cling to the power they possessed. Instead, they tended to distribute their power outward from the national and state capitals. They kept taxes low. When surplus revenues arose, they spent them on roads and other infrastructure projects of broad, general benefit. When private initiative created new forms of economic enterprise –textile mills, turnpike companies, banks, and so on–they did not jealously constrict the freedom of such enterprises but instead liberally dispensed charters of incorporation to them.  American capitalism is founded on the liberality of America’s first federal and state legislators.

The relationship between this eighteenth-century liberality and modern American liberalism has never really been explored. I take a stab at it in my book (shameless plug ahead), From Liberty to Liberality: The Transformation of the Pennsylvania Legislature, 1776-1820. I do believe liberalism today has at least part of its origins in this early American liberality. Liberals today certainly think of themselves as broadminded, flexible, big thinkers. Liberals confidently carried out a massive and daring overhaul of the nation’s health care system as though smaller fixes were the work of smaller minds. Across vast stretches of human inquiry, liberals believe truth changes over time as circumstances change and new evidence comes to light. Above all, perhaps, liberals embrace generosity, especially government generosity, as a value.

On the other hand, there are some big differences between eighteenth-century liberality and modern liberalism. Modern liberals do not have a strong belief in the Aristotelian idea of virtue of which liberality is an example. Hence they lack the vivid sense of constraints that that idea imposes on acts of giving. Liberals today have no problem taxing a rich man, giving the money to a poor man, and calling that generous. But such a manuever lacks key requirements of liberality in Aristotle’s sense. There is insufficient freedom in it: the rich man may not want to give over his money. And there are also problems of reasonableness and purpose. What good will the poor man do with the money, and what good will the rich man not be able to do without it? Liberals are also advocates of increasing government debt in hard times–the so-called Keynesian strategy. In the eighteenth century, by contrast, there would have been no clearer mark of prodigality than borrowing in order to give.

Such difficulties point to the great gap that has developed between the liberality of our Founding Fathers and modern American liberalism. My preference lies with our eighteenth century founders. If we could all return to their idea of liberality, we would have, no matter what we called ourselves, a greater capacity to do real good with the governments the founders gave us.

7 responses to “Were the Founding Fathers Liberal?”