I am The Doctor. Who? 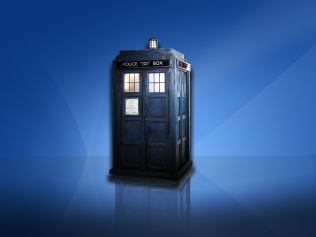 I’ve always felt like a time traveler in my own life.  It’s a weird condition.  Maybe there is name for it – temporal dysfunction, PTDO (present time deficit disorder), or chronos syndrome.   Whatever the official name, I’ve never felt like I was living at the right time.  It’s not that this time I am in is wrong, but rather I feel like I’m just visiting.  That this isn’t my time.    Does anybody else feel this way?

My condition manifests itself in different ways.  I sometimes become an observer of things that most people would pass by as mere background noise.  For instance, I’ll walk into a shopping mall and say to myself “If I was visiting from 1985, what would I notice.  What would stand out first?”  Then I notice the Star Trek communicators that everyone seem to carry and constantly engage with.  The flat, small tablet computers people read from in the coffee shops.  The animated graphics on the menu from which I order my lunch.  I notice the color of cars.   Fashion.  Hairstyles.

My symptoms don’t limit themselves to just observing the here-and-now.  When I visit historic sites, like the Alamo here in Texas, I can see and touch and smell the people who were there during their occupation.  I can stand at the doors of the Alamo and hear the bullets, sense the commotion, smell the gunpowder, feel the cold night air of early March.  I know that I am standing in the spot where, just a few moments before me, men fought.  Men died.  I am there.  Their ghosts run through me.  Only time separates us, and its an ephemeral barrier.

My wife thinks this is all very strange.  My musings about “love and time” probably don’t help.   I’m convinced that given the way human nature is, that if I  lived in a different era, I would still find somebody to love, marry, have kids with, and live life.   Does the fact that I met my beautiful wife in this life, mean that if she had not existed, I would not have met some other woman to marry?  No.  So why should time be the limiting factor in love?  Couldn’t I also find somebody to love if I had lived in a different age?  Yes.  In that sense, she and I were meant to be together in that time just as much as my wife and were meant to be together in this time. Only time separates us.  What was her name?  Did she like to dance?  What did her hair smell like?  Would she laugh at my jokes?  I’ll never know.

Is something wrong with me?  Is is possible that in the cosmic plan of our Creator, some people are more attuned to time just like some are more attuned to music, logic, art, or emotion?  Maybe I need to start a support group for others who struggle with the same problem that I have.  Am I alone?

I’m not sure there is a cure for this condition I have.  It is a burden.  It is a gift.  I just hope I can one day make sense of it all.

Only time will tell.