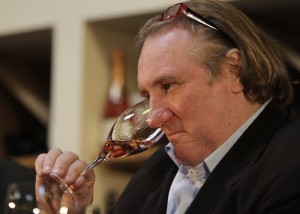 John Galt,  the fictional character from Ayn Rand’s Atlas Shrugged, doesn’t appear until the last third of the novel.  For most of the work he’s a phantom, always in the background, waiting for the right moment to make his appearance.  When he does appear, it turns out that the enemy of left-leaning plutocrats everywhere has been hiding out on his own private island.  Why? First, there’s the principle of the matter.  Galt hates collective-minded bureaucrats who use democratic language like “equality” and “fairness” to strip hard-working individuals of that which is legally earned and privately owned.   And then there’s the simple mathematics of the matter.   Hiding away on a private island is a great way to avoid paying taxes.

Galt would welcome Gerard Depardieu to the island.

I’m not much of a Francophile, but I’ve taken a liking to French Actor Gerard Depardieu.   Depardieu has become somewhat of an international poster boy for the anti-tax crowd.  France, reliving the glorious days of ‘le revolution’, recently tried to pass a whopping 75% income tax on citizens making more than a million Euro’s a year.  It’s almost double the previous 41% rate.

Apparently egalite’ doesn’t extend to tax rates.  Depardieu estimates that he has already paid almost $200 million Euros in taxes to the French government during the course of his career.  In frustration, he’s packed up, sold his Parisian palace, returned his French passport, and applied for citizenship in Russia.

The Russians are glad to have Depardieu and his millions.  Ironically, the Russian tax rate  (a flat 13%) is much lower than the French rate, and Russia is willing to provide a Galt-like sanctuary to the world’s huddled millionaires yearning to breathe free.  Oh, the irony that the former “evil-empire”  has now become a tax-haven for European wealthy elite!  Maybe the Mayans were right, but chose the wrong omens.

The lesson here, as is evident throughout Europe and here in the US, is that higher taxation as a means of funding socialist programs is immoral and self-defeating.  It’s immoral because it lays claim to the hard-work and success of others.  Even if you want to make the argument that these people are just lucky (to which the proper response is that “the harder I work, the luckier I get”), what’s the moral argument for laying claim to 75% of a person’s earnings?  Taxes are a necessary part of a civil society, but 75% is confiscatory politics at its worst.  When you give other people (either bureaucrats or voters) the limitless power to confiscate other people’s property they will simply because they can, and because it’s a means for them to stay in power.  If I can take what’s yours and give it to someone else in exchange for their political support, I can secure my own station in life by bleeding off yours, all in the name of “the people.”

Such high tax rates are also self-defeating.  Depardieu is just a highly visible example of what happens all over the world.  The French government estimates it loses between 600-800 citizens each year due to high taxes.  You can bet it’s the wealthy who leave.  England had the same experience when it recently raised taxes on millionaires.  Stateside, California and New York are both struggling to keep high-income residents from fleeing to greener pastures, like my home state of Texas (which boasts no income tax).  In the end, the very life-blood of revenue that liberals depend on for social programs falls short because the very people who supply it – the wealthy – are demonized and abused.    The only problem is that the that rich are a pretty enterprising and mobile group of people with a pesky habit of finding solutions.   This is not at all like dependent, immobile, poor citizens who career bureaucrats find much easier to govern.

Margaret Thatcher warned that the problem with socialism is that you eventually run out of other people’s money.  And that’s exactly what’s happened here.  But whoever imagined that Mulligan’s Valley could be found in the former Soviet Union.