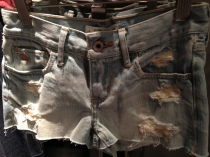 In a recent outing with my daughter, we stopped by a high-end clothing store for teens and young adults. The clothes are much too “old” for my 6th grader who, because of her petite size, often gets mistaken for younger than her 11 years. And the clothes were very expensive as well. Nonetheless, she wanted to go in and I, wanting to support her individuality, obliged.  In addition, I figured it would be my only chance to go into such a place without having security called on me.

Aside from the painfully loud volume of the music (which was really at dance club level), two things struck me. First, all the high-school models in the photos were in various states of undress. This seemed a bit odd to me for a store that was supposed to be selling clothes. You would think you would want people to put them on, not take them off. I get it though. Sex appeal.

The other thing was the prices.  For example, there was a pair of girl’s shorts that were cut very short. We used to call them short-shorts when I was growing up. The preferred terms these days is “booty shorts.”  Great.   It wasn’t the length that caught my attention, however, but rather the condition. They looked like they had been well-worn, worn-out even, and on the verge of being thrown out. You couldn’t give these shorts away to charity because they were in such poor condition. Nonetheless, here they were hanging on the rack …..with a price tag of $42! (see picture above for the actual booty shorts).

After I stopped laughing (good thing the music was so loud), I noticed that most of the other clothes were of an equally tatty nature. The clothes looked like those worn by Robinson Crusoe after a year on the island (that would make a great name for a clothing store – Crusoe).

Why the contrast between appearance (impoverished and shabby) and price (posh and exclusive)? For understanding, you need to read Alexis de Tocqueville. Young Alex was basically on a college graduation trip to America in the early 1830’s when he started working on his famous Democracy in America. This important book reports the sometimes flattering, sometimes critical, but always prescient observations of the young Frenchman on his travels through our fledgling democracy. Many people today still contend that if you want to understand America, you should read Tocqueville. I think they’re right.

Tocqueville writes mostly about the influence of democracy on the American mind. Our emphasis on democracy and our reverence for equality, he notes, permeates American culture. Nowhere is it more powerful than in public opinion.  Nothing can be permitted but what is acceptable to “the people.” For a young Aristocrat, such an emphasis on the preferences of the masses seemed odd. All elements of culture in Europe – art, music, food, dance, literature, clothing – were influenced by the elite, wealthy, and well-educated. In pioneering America, the opposite seemed true.

That brings us to the booty shorts. You only have to watch one episode of Downton Abbey to understand the status and standing that clothing conveys. But in America, Tocqueville contends, social status is a bad thing. No one wants to be seen as aristocratic or elitist because it defies the egalitarian sensibility of American society. Rather than trying to stand out, we Americans prefer to blend in.

Hence our fascination with blue-jeans, which masks our social status rather than conveying it. Jeans can be worn by rich, middle class, and poor with little fear of condemnation.  We can even wear jeans to the office now, to dine out, to go to the theater, and even to church.  Maybe this explains why restaurants and churches have become more casual in their clothing requirements.  In America, our clothing, rather than setting us apart, tries to equalize us.  Our clothing is an outward and visible sign of our American equality.

The ratty booty shorts are symbolic of what Tocqueville was trying to express. These expensive shorts allow girls from rich families to convey a much different image – one that rejects wealth and elitism.  They look like shorts worn by someone from a much different background.  It helps explain why our sons in the suburbs want to dress like kids from the ghetto, and while the boys from the ghetto want to buy expensive tennis-shoes and flashy jewelry to look like they come from wealthy families. The poor want the appearance of wealth, while the wealthy want the appearance of poverty, because the safest place to be in a democracy is in the middle.

We didn’t buy anything in the store, but we had fun looking. I realize my daughter is getting older by the day. I couldn’t help but notice that on the way out, she turned to look back at the middle school boy who had just passed us coming in. He looked like a nice kid, except for the fact that he was dressed like a street urchin, which tells me his father is probably a banker and his mother is an attorney.