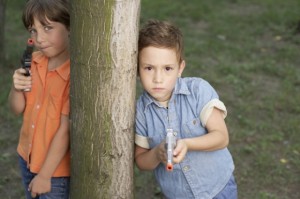 Schools Should Not Be Afraid of Armed Guards

In 2008, I moved back to Texas after living some 20 years on the East Coast. Eager to contrast the two cultures, I did not always find the differences I expected, but on the matter of guns I was not disappointed. Apart from occasional references to hunting, my East Coast conversations had rarely revolved around guns. I didn’t know of anyone in my neighborhood just outside Philadelphia who even owned a gun, much less wanted to talk about firearms. Doubtless the story was different in Philadelphia proper, but even there the dominant urban Democratic culture had long since embraced gun control, and educated opinion, for what it was worth, took the same side. Here in Houston, by contrast, guns seem to be an almost daily topic of conversation, among all classes. I have brought little more than Yankee ignorance to these discussions. “I used to be a native Texan,” I recently told my gun-owning neighbor, apologetically.

Of course, there had always been a gap between myself and many of my fellow Texans. I did not grow up in a gun-owning household. There were seven kids in our family, and my father made a decision early on that guns among so many children would raise more difficulties than they were worth (the guns, I mean). By my college years I had something of an East Coast attitude toward guns before I had even set foot on the East Coast. As a student at The University of Texas at Austin, I remember remarking to a female friend, “When I think of guns, I think danger.” She replied, “When I think of guns, I think safety.” She kept a loaded pistol under her pillow at night. One of the great underdiscussed themes in the gun debate is the use that thousands of women make of guns as potent equalizers in their otherwise unequal encounters with bad men.

We are now some six months from the Newtown shooting, though it seems much longer. There has been no significant change in gun laws, nor in the way children in our schools are protected from gun violence. The Democrats proposed background checks at gun shows, an assault weapons ban, and limits on magazine capacity. They failed to secure enough votes in Congress. The National Rifle Association (NRA) proposed federal funding to hire armed police officers for the protection of children in our schools.  Gun controllers responded to the proposal with disbelief and scorn.

That response interests me. Clearly, gun controllers were appalled at a proposal that seemed to simply divert public attention from their own solutions. But there is a deeper explanation for their response. Many Americans–including many public school administrators and teachers–envision our schools as pristine paradises; as places at least potentially untainted by the evils of the world; places where a new more perfect world can be incubated and grown, in the hearts and minds of schoolchildren.Vice-President Biden himself recently spoke of schools as “sanctuaries.” In this view, children can be separated out from the evils of the broader society and taught as innocent blank slates in the school’s protective, nurturing environment. Thus formed, the children can then go out into the world and make it more like the  paradise they experienced at school. The whole society can become as gentle and nurturing as Loving Sweet Elementary.

For opponents of the NRA proposal, guns in schools spoil this project. Guns in school would teach kids that guns are a necessary part of normal human society. Guns in schools, even if only on the holsters of security guards, would dangle before young imaginations like the forbidden fruit in the Garden of Eden. The kids would imaginatively grab that fruit and spoil any chance of paradise, in school or out.

I have great sympathies with the political tradition in which this view originates. “School perfectionists” are heirs to the moral reformers of the early nineteenth century–men and women who recognized the dangers of alcohol consumption and the inhumanity of slavery. They are heirs to the progressives of the early twentieth century, who worked to improve working conditions in the sweatshops and steel mills and who saw schools’ potential to assimilate waves of immigrants into American life. The belief that a society is capable of substantial moral betterment has enabled the United States to become a better country. But this perfectionism has always threatened also to lead us down blind alleys and to cause us to lose the partial but very real goods we already possessed.

There is nothing wrong per se with a proposal that armed guards be posted at every school. There is much that is very right about it. It is a proposal that should not be laughed out of the gun violence debate. It would not prevent all school gun violence, to be sure, but it would probably deter and limit some of it. Schools are not Gardens of Eden. The children in them, already flawed little Adams and Eves, deserve our protection more than our perfectionism. Schools should arm up.

I can’t help but think that eventually we will see many more armed security guards and police officers patrolling our public schools than we do today. The only question in my mind is how many children will be killed, and how many schools sued, before this change takes place.

The home I grew up in was gunless. But I’m sure if my father had felt gun violence to be a pressing threat, he would have armed up. And if he had had the financial means, he would have hired an armed sentry at our door. Why should our schools, which spend so much money on so much else, not spend on this as well?