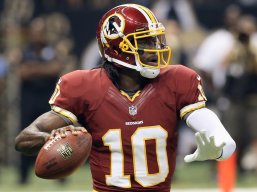 Don’t get me started on The Lone Ranger (better title: Tonto and the Dude)

Surely you’ve heard the latest social problem that really needs our immediate attention. The NFL Washington   Redskins are basking in some well-deserved glory because of their exceptional accomplishments on the field of  play. They’ve got a superstar quarterback both on and off the field. I’m very much biased and like many Baylor alums have become an instant Redskins fan. Let’s see what the Texans can do this year.

I’ve read a number of sports media critics who have decided that in order for all of us to feel better, the owner of the Washington Redskins needs to change the name of the team. “Redskins” is too degrading to Native Americans and should no longer be used as it perpetuates harmful and inaccurate stereotypes. You’ll remember similar efforts with high school, college and professional teams over the past decade or so.

The owner of the Redskins, Dan Snyder, said that they would NEVER change the name. The NFL Commissioner, Roger Goodell, responded to these detractors from the media and even some members of Congress (who of course love to get on the latest bandwagon) with an open letter explaining how the name should be rightly interpreted in a positive light.

I couldn’t help but wonder…

These critics demand that this NFL team spend millions of dollars to rebrand themselves.  I think it’s so all the rest of us can feel better. But I’ve not heard anyone make any serious appeals that we spend more money on actually helping Native Americans improve their lives. According to the latest U.S. Census (despite the advent of gaming on many reservations)…

I think what happens to us in our Mass Culture is that we want to just feel good about the game that we’re all playing. We don’t want to take the time to get into the gory details. We just want someone else to fix everything that the talking head on TV tells us is wrong with our world. Ignorance is bliss. A multimillion dollar NFL franchise is such an easy target to joust at and then pat ourselves on the back about afterwards. Asking me to demonstrate my own convictions in my own life with my own neighbor might be a whole other story…an inconvenient one.

“All social inequalities which have ceased to be considered expedient, assume the character not of simple inexpediency, but of injustice, and appear so tyrannical, that people are apt to wonder how they ever could have been tolerated; forgetful that they themselves perhaps tolerate other inequalities under an equally mistaken notion of expediency, the correction of which would make that which they approve seem quite as monstrous as what they have at last learnt to condemn.”  – John Stuart Mill

The author and scholar Shelby Steele writes about the phenomenon he calls White Guilt. I often wonder if he’s right and if much of what we attempt in the name of making a more just society are just efforts at de-stigmatizing our own selves.

Two great, immutable forces have driven America’s attitudes, customs, and public policies around race. The first has been white racism, and the second has been white guilt. The civil-rights movement was the dividing line between the two. Certainly there was some guilt before this movement, and no doubt some racism remains after it. But the great achievement of the civil-rights movement was that its relentless moral witness finally defeated the legitimacy of racism as propriety–a principle of social organization, manners, and customs that defines decency itself. An idea controls culture when it achieves the invisibility of propriety. And it must be remembered that racism was a propriety, a form of decency. When, as a boy, I was prohibited from entering the fine Christian home of the occasional white playmate, it was to save the household an indecency. Today, thanks to the civil-rights movement, white guilt is propriety–an utterly invisible code that defines decency in our culture with thousands of little protocols we no longer even think about. We have been living in an age of white guilt for four decades now.

What is white guilt? It is not a personal sense of remorse over past wrongs. White guilt is literally a vacuum of moral authority in matters of race, equality, and opportunity that comes from the association of mere white skin with America’s historical racism. It is the stigmatization of whites and, more importantly, American institutions with the sin of racism. Under this stigma white individuals and American institutions must perpetually prove a negative–that they are not racist–to gain enough authority to function in matters of race, equality, and opportunity. If they fail to prove the negative, they will be seen as racists. Political correctness, diversity policies, and multiculturalism are forms of deference that give whites and institutions a way to prove the negative and win reprieve from the racist stigma.

The Age of White Guilt and the Disappearance of the Black Individual
Shelby Steele, Harper’s Magazine, November 30, 1999

What do you think? Will creating a politically correct nomenclature for sports teams really do much to make a better world for all of us? Or will it just make us feel better?