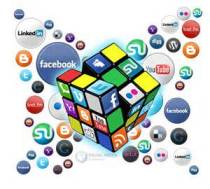 Social media is one big junior high dance: Everyone alternating between being shy and outlandish, all in the desperate hope of getting notice.  And like the junior high dance, you slowly realize that a lot of people are looking to get noticed, but they aren’t noticing others.  They are trying to be heard but no one is listening to each other.  The myriad social media possibilities give us more ways than ever to broadcast ourselves.  We, like SETI, beam ourselves into a cold dark universe hoping for a response.  But how do we know if anyone is listening?  How can you tell if you are a big deal?  To help those looking for an answer to this questions, I have developed the following equations which I hope will help one gauge and clarify one’s place in the great chain of online being.

Facebook is about the overlapping circles of our existence.  It is not simply about the number of friends you have but the number of friends they have that are different from yours.  If you have 10,000 friends but each of them also has only the exact same friends, the maintenance of these friends can be teadious, but your reach is limited.  But if you only have 100 friends, if none of those 100 friends knows each other, your circle remains manageable while your reach remains the same and is enlarged by their capacity to share…yada yada stuff we all know.  So the formula for using facebook as a guide has to factor in friendship but cant use it exclusively.  How can you judge if people are listening to what you are saying.  3 metrics are revelatory: Likes are good.  Comments are better.  Shares are golden because now your reach expands.

Twitter is Facebook boiled down to statuses and without the concept of friendship.  In Twitter you follow and are followed.  But, whereas in Facebook when you friend somebody a reciprocal relationship is created, in Twitter just because you follow other people doesn’t mean they follow you…and vice versa.  Your online power cannot simply be gauged by whether you follow or are followed by a lot of people.  Twitter can be manipulated to boost followers.  People follow with the hopes of being followed back.  Rather, Twitter power is a ratio determined by comparing followers to those you follow.  The higher the number, the bigger the deal. Someone who has 10,000 followers, but has to follow 11,000 in the process = nobody.  Someone who has 10,000 followers, but only follows 500 = way bigger deal.

The Blog is your primary area for developing significant and attractive content.  It is your platform, your soapbox, your microphone, your pulpit.  Declare your intentions.  Reveal yourself.  Build your following.  And that is the problem, if no one is reading it, it might as well not exist.  You are ranting to yourself.  Fortunately, blogs have built it functionality to assist you in being heard.  You can share across social media platforms like Facebook, Twitter, and Google+ (whatever that is…I think it’s like myspace).  You can also follow other blogs and get people to follow yours.  You can also like specific blog posts. Shares are unequivocally good. Follows and Likes can go either way.  Some people follow or like a blog as a means of attracting you to their site.  So the equation must factor this in.  Also, following a blog is like getting the newspaper delivered to your house.  If each blog post doesn’t get a hit for every follower, it means people are getting your blog delivered to them and throwing it in the trash.  Comments don’t count at all. They say nothing good or ill about you.  Try not to read them…especially the long ones.  Nothing edifying or productive has ever happened in the comments section of a blog.

Here  is the blunt, honest truth.  I have made it pretty far into the social media revolution with only a vague notion of what either Pinterest or Instagram are.  This vague notion has led me to believe that neither serves as a useful gauge on your online importance.

Pinterest, from what I can tell, seems to be a place where women go to plagiarize craft ideas and food recipes.  Whatever “pinning” something on Pinterest means, it doesn’t mean expansion of your online identity.

Instagram, I think, is the pictures-only version of Twitter.  From second hand information, I have concluded that it’s for people who want to broadcast themselves…or specifically pictures of themselves and where they’ve been…but don’t want to interact with others.  While this vehicle might seem similarly suited to Twitter for people who want to talk but don’t want to listen, given the visual nature of the media and the highly personal dimension to the content, Instagram seems primarily useful for attracting stalkers…and that is a whole different blog post.