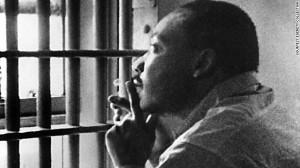 It seemed an excellent idea for our new Turning Points in American History lecture program.  Honor the 50th anniversary of Martin Luther King’s “Letter from a Birmingham Jail” by bringing in a speaker who could address the topic from the angle of natural law.  The planning committee found just the right speaker, too.  Dr. Justin B. Dyer, a political scientist at University of Missouri, offers a rare combination of expertise in both civil rights and natural law and he graciously accepted our invitation to be our keynote speaker.  As committee chair I contacted several local scholars of the civil rights movement, three of whom agreed to serve on a discussion panel.  All was well.

But if the devil is in the details he was working overtime on our commemoration of the fiftieth anniversary of King’s landmark letter.  Plans for an early summertime start on implementation fell through and we ended up racing the clock, one of my least favorite things to do.  The flyers turned out speckled and had to be re-done.  The directional signs used a different location marker than our publicity and we had new ones made posthaste. The printers of our fund-raising pamphlets ran out of time, but agreed to work overtime so that I could pick them up at 7 p.m. the night before the event. I misread Dr. Dyer’s itinerary and put my dean to major inconvenience.  And that is just a sample.

A sadder and more serious obstacle was that the one of the panelists had to withdraw due to a family emergency.  Since this panelist specialized in black women in the civil rights movement, I cast about for a substitute.  I found the perfect match in Linda Reed of the University of Houston.  With less than one week to go, I sent her an e-mail and hoped to hear back.  No response.  No response to my other inquiries either.  I thought that at least I could sit on the panel myself as a highly inadequate substitute.

Two days before the event, an e-mail reply came in from Dr. Reed.  Yes, she would be available to sit on the panel.  She had been traveling, as it turned out, and on her way back to Houston she had been musing on Houston Baptist University, which she routinely passed on her way to work.  She was thinking that she would like to visit our campus, and when she received my e-mail it struck her as just the right opportunity.

On the evening of the Commemoration it all somehow came together.  Despite Houston rush hour traffic, all presenters made it in good time.  The chapel where the event would take place was in good order.  And, to my astonishment, the audience streamed in.  I had guessed we would have several dozen, or it might well be a hundred with all the support we had received from our colleagues.  In my most optimistic moments I dared to hope for two hundred.  But Belin Chapel was filled almost to overflowing, and according to our publicity the chapel seats 372.  The rest of the evening went off without a hitch.  Dr. Dyer’s talk was superb, the panel discussion was lively and thought-provoking.  And with the connections made that evening, we know that the conversation will be ongoing.

When so many things went wrong, how did it all in the end go right?  I don’t altogether know, but I was on the mountaintop that night.

One response to “What Went Right?”