For most Americans, St. Patrick’s Day is a day to wear green.  For some, it is a day to enjoy a St. Patrick’s Day parade (Chicago and New York City are the most famous in America).   For others, it may be a day to enjoy traditional Irish food such colcannon, corned beef and cabbage, or soda bread.  On this day I always remember the amazing academic odyssey I had in pursuing my PhD there as an international student at University College Cork-National University of Ireland (UCC).  UCC is believed to have been built upon the remains of St. Finbarr’s 6th century renowned monastic school in the ancient province of Munster. 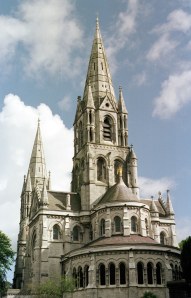 Why would someone choose to be an international student and travel to a foreign place when they could stay in the comfort of their own home culture?  There are several reasons:  academic excellence and global experience. My choice involved both.

My adventure actually began in a seminar on rhetoric and social theory at the University of Iowa where I was studying for an MA.  In this seminar, we had all been assigned various theorists to research and report on during the semester.  I was assigned Jürgen Habermas, a German social theorist.  His work made a lot of sense to me. At the end of the semester my professor, Michael Calvin McGee, thought I should try to study in Germany.  Unfortunately, my language skills were not adequate.

Not long after that, I married and moved to Southeast Asia to live and work.  While there, a number of European friends said that I should continue my studies.  Together, we found a former student of Habermas’, Piet Strydom, who taught at UCC.  It was a university where English, not German, was the language of instruction.

I wanted to write a dissertation about communication in the global public sphere.  The whole thing made perfect sense:  An American teaching in Singapore and studying in Ireland with a South African, and ultimately, having a German as an external examiner.  Piet and I worked well together and I think it is because we were both outsiders.

What many people don’t realize is that being an international student isn’t easy, even if you’re a seasoned traveler.  At the beginning you’re an outsider.  Though I spoke English, it was not the same as the Irish English I had to deal with every day or the British English I had to use to write my dissertation.  As many know, words are pronounced and spelled differently depending on your part of the English-speaking world.

The culture and environment are also different. You have to acclimate to new food, clothing, currency, technology, and weather.   Most host cultures are quite accommodating to international students. Certainly the Irish were.  However, you often feel alone in a country when your family is half a world away and the only contact you have is through a red telephone box on a street corner.  (Skype has made a difference for today’s international students!)

Eventually, you begin to assimilate. You make new friends at your school and you get to know the local merchants.  You learn how to speak and write in the local language.  You learn how to live in the new society.  I think the moment I knew all was well was when I was walking to the university and had crossed the River Lee when a group of American tourists stopped me and asked me the way to St. Fin Barre’s Cathedral.  When I told them, they were shocked because I had an American accent.  They exclaimed “We thought you were Irish, but you sound American!” I just smiled and said “In a way, I am both.”

In the end, I kissed the Blarney Stone to get “the gift of gab” before my dissertation defense and can now say I received a PhD where the motto is “Where Finbarr Taught, Let Munster Learn”.  It was an amazing experience and I encourage students to think about an international education of some kind, even if it is for a semester.  Although it will not be always be easy, it will be one of the most rewarding experiences you will ever have.