Today, March 20th, is the first day of Spring.  If you are really in the know, you might call it the Vernal Equinox, and do that little experiment in which you test an egg and see if it shares the equilibrium that is supposed to infuse the day.  This winter was not any colder than usual in Texas, yet I have been longing for everything to warm up, even though I know friends from other parts of the country have had it much rougher.  My friends post messages that lament the snow, even if it does look beautiful.  Rarely have I had to deal with ice on my windshield in Houston, although it was freezing when I visited San Antonio in February. I hadn’t even thought about ice since I lived in North Carolina, but there, I just told everyone I was from Texas and stayed inside until the weather got better.  Trust me: they didn’t want me driving either, and all it took was one spill on some black ice in a parking lot to make me pretty much succumb to complete hibernation during winter storms.

But today, in Texas, is perfect.  It is not humid, it is not too hot, it is not too cold, and when I take my walk I see all the greenery and think it looks like it has been spring for ages.  Nature can fool you that way: it changes costumes, makes you forget the previous scene.  I am supposed to be running, but I have injured my heel, and I am sort of grateful that I am walking so that I can really look around me.  Things are starting to bud, and I can see the holes in the telephone poles from the woodpeckers that I usually hear when I am running.  Usually, they are as loud as jackhammers, relentlessly pounding away at the helpless poles.  Today, I don’t hear them, but I can see the magnificence of their efforts.  Those woodpeckers don’t give up.

Today, I am thinking of my friend Joan, who lives in Michigan.  We met at a writing conference in Dallas years ago in the thick of summer.  She was in a workshop with me that year, then the next, she was my workshop leader.  Last winter she posted pictures like this one, reporting that the Great Lakes were frozen, and as she and her husband are organic fruit farmers near Lake Michigan, I knew these were more than weather reports.  When we were in the first workshop together, she had written a wonderful essay that ended up winning all sorts of prizes about how the weather can make or break a farmer’s crop.  In her essay, “Saint George and the Dragon,” she recounts a year of unusual weather:  not enough snow and rain, a terrible drought that decimated their blueberry harvest, compromised their peach trees, brought emotional as well as financial turmoil to their lives at Pleasant Hill.  This year, I wanted to know the effect of more frigid temperatures on her fruit.  Her essays remind us that for “centuries, farmers have gambled, waging against frost, drought, insects and spoiled hay.”  But as she describes the extremes of Michigan weather, snow-filled winter days, searing summer temperatures, you can’t help but feel as though the deck is sometimes stacked against the very people who care the most about the land.

But this piece, the one on the dragon of drought, was just one essay of the many wonderful pieces in her 2013 book from West Bow Press called Wedded to the Land:  Stories From a Simple Life on an Organic Fruit Farm.  On the cover, Joan stands with her husband, John, and two oxen.  One of the joys of reading her prose is realizing that after she married John after college, she acquired chickens, then goats, then oxen–all with tremendous fearlessness.  You read her shimmering prose and you want to go out and try new things, even if you don’t live on a farm in Michigan.  I remember seeing a picture posted of one of Joan’s beautiful quilts, and feeling a wave of shame come over me:  I wouldn’t know the first thing about quilting, or sewing, or growing peaches, but she knows how to do all of these things, and more.  But don’t let the title fool you:  there is plenty that is complicated about Joan’s life, at least from where I am sitting.  She and her family figure out how to deal with diversification, build barns, raise adopted children from Columbia.  But this is the thing:  her prose is so readable, such a pleasure to read, she makes it sound simple and easy.  But in my heart, I know it is not.  This is the magic of writing:  another thing Joan does so well.  She makes things sound simple, even when they are not.  She is a mistress of understatement, which is really something as you don’t forget what she says.  It doesn’t slip away like the seasons. 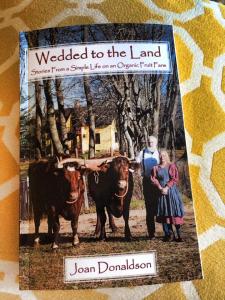 This Spring, which begins today, has made me think of Joan and her essays, the lines that make me stop in my tracks.  In her piece called “The Green Man,” she begins with a simple sentence:  “Spring refused to come one April.”  But this is no minor disappointment: the weather rules everything, and has severe consequences in every component of rural life.  The reader realizes this as she explains, “Beneath gray cirrus clouds, we worked with our ears hunched into the collars of our winter jackets. Seed packets waited to be planted, baby goats shivered, and the pastures remained dormant.”  Joan brings to life the seasons, and reminds us of their power even when they fail to change in the ways we expect, just like everything else we might count on in life.  They have much to teach us.

Today, marching through March, reveling in the fresh air of the first day of my favorite season, I was trying to concentrate on Emerson, and his essay “Nature,” which I will teach next week.  You know, nature is a symbol of the spirit and all of that.  But instead, I was thinking of this travel site that I stumbled upon that had gotten me way off track and fast into The Land of Spoiled Brathood.  It is this travel site run by a woman who goes to luxury spas and hotels and stays for free and writes about them.  This month, she was in Switzerland and skied and apres-skied and wrote all about it, and talked about what luxury hotels should have, and how fabulous it was, and how great the snow was, and here I was sliding right into the sin of envy faster than you can ski down a Swiss Alp.  Now this is probably a perfectly nice person with a great sense of adventure and wow what a great gig she has and all, but it made me think of this passage Joan wrote about when she was picking peaches in the Michigan heat, and she thinks about the people who just BUY her peaches, and how her life might have been different:

But what would it be like to spend a muggy August afternoon driving to antique shops instead of scratching my skin off?  Or sharing a picnic on a screened-in porch of a summer cottage before stretching out in a hammock with a book?  We could have been them, I reminded myself.  After college, we could have earned more initials to tack behind our names and worked for a petroleum company or spent our summers creating syllabuses for our fall classes.  I could be wearing sandals and choosing a quart of peaches at a fruit stand, but they would not taste the same.

I thought of this section because this is what I was thinking about this travel writer, and how it was like someone had just given me a shot of High Dosage Jealousy, and boy was it taking no time at all to take effect.  And how this travel writer was assessing things like how good is listening to Mozart in Austria (???), and how I suspected that she was right–that it was fabulous!  And amazing!  And in Austria!  And how I wanted to write something that was that easy to figure out was FANTASTIC and tell everyone how the most expensive digs in Europe, shockingly enough, were just unbelievably great.  I am not sure exactly what part of thou shalt not covet I was not getting, but I definitely needed a refresher course.  It didn’t help that apparently she used to be an English teacher, and the thought of going back to that life was out of the question and actually made her ill, or that she posted a post on how traveling through the Alps was so exhausting, and so fabulous, and so wonderful, that she had to book a vacation to recover, and would not be writing for awhile.  Well, there you have it.

So what saved me from myself was reading Joan’s wonderful book, which snapped me right out of it, as she describes the lives of the migrant workers who help work the land, the hard and honest work which makes the reader marvel at what farmers do for all of us every day, and her joy in working in nature, whether it be savoring a hard-won perfect peach, tapping the sweet maple sap, or channeling the struggles of winter into prose that stays in your head way beyond changes in temperature.  When someone can convey what his or her life is really like, even in the midst of drought and storms, without the safety of the quid pro quo of commercialism, there is a bravery in the writing that I cannot help but admire.  Joan isn’t advertising anything.  She tells us the truth about the challenges of life as a farmer that inspires all of us to persevere no matter what walk of life we may have:  even without first class seats, complimentary lift tickets, and free dinners.   There is nothing wrong with that per se, but it is easy to get caught up in someone else’s trajectory when it seems so unbelievably easy and magically presented.  Instead, someone like Joan was able to pull me back down to earth, see the heaven already around me, make me feel grateful for the ground under my feet.  In her last essay, “Teamwork,” Joan asks her husband, “Can you smell spring?”  She has taken us so much into her world in Michigan, even someone from Texas knows what she means.

This morning, Joan posted this picture from Michigan.

I live in the suburbs, where nature is wrested into forms that won’t get in the way of houses, shopping centers, and schools.  But there are still blooms to wonder about, banging woodpeckers, wide open skies.  It is March 20, and as I write this things have already changed, the many of more rites of spring.  I knew that even on the coldest days in winter, that spring would not be far behind.  But now, it means more than before.