Angelina Jolie may be the most beautiful woman on the planet, the face that launches not thousands, but countless ticket sales for the pleasure of seeing her unforgettable image on the wide screens of movie theaters across the globe.  Like Edgar Allan Poe’s “Helen,” she has a “classic” beauty that seems to defy time.  She does not seem of this century, but of any century, take your pick. 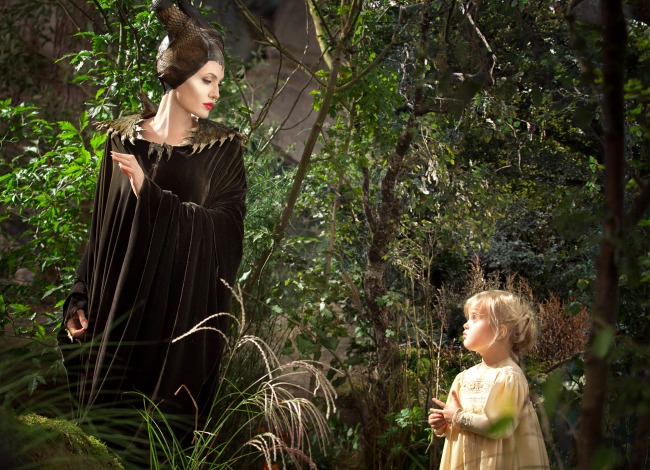 No wonder she was chosen to play the gorgeous and gloriously malcontented Maleficent in Disney’s “retelling” of the animated “Sleeping Beauty” that I saw as a child.  And why not?  Figuring out whether or not “true love’s kiss” cures anything, including the need for a wake-up call, is a puzzle that is never going to go away.

Now let me tell you right up front that this is not a movie review, and I am going to give it all away, so just ex-out right now if you are afraid of “spoilers.”  This is just some writing–you don’t need movie reviewers to help you with Disney movies now, do you? Of course not. And to tell you the truth, I am sick to death of “critics,” with their murderous dissections, their insufferable arrogance.  They don’t “help” me as much as they protest. It’s my movie and I will like it if I want to.  Or, not.  Usually, I change sides. I like to think about it, revel in ambivalence or just be fickle about it.  Hey, the stakes are low.

Plus, we just had the the longest day of the year, and I didn’t miss it, but it is hot in Texas, and although I usually miss movies before they have left the theaters, I took my son to see this film at one of those places that serves food while you watch and has supercharged air conditioning.  The summer goes fast–I always feel in a rush to do things before we have the tyranny of a schedule, so this is multitasking at its finest:  we can cross off a movie and dinner in one fell swoop as Angelina Jolie swoops in under her magnificent wings as we drink real cokes and fill out our orders on the little paper forms in front of us.  It’s like a drive-in without a car.  Sort of.

So Christopher, who is twelve, wants to see this movie because we already saw “Divergent” which I loved because I had not read the book and so I had no idea what was coming.  Christopher was “forced” to read the book (his words) and he finds it amusing that he is forced to read the book in a public school because mostly the book addresses being forced to do things that you don’t want to do.  He has a point. Anyway, if I had known it was so violent, I might have nixed the whole day, but that is the trouble with being twelve and thirteen:  things are either too babyish, or inappropriate, but there you are sitting in the theater thinking, “Well, maybe this isn’t THAT bad,” but then you think maybe it is, and then becoming Amish sounds like a great idea. When we are in the car leaving, I start talking about how we are all “divergent,” all have lots of strengths, and then I realize that I sound like an advertisement, he has heard something like this before, his eyes start glazing over.  So I stop talking and we listen to the Bee Gees. I cannot tell you how much I miss the innocence of disco, which used to be sort of eye-brow raising, but now seems totally okay and pretty G-rated, and I wonder if Christopher will ask me about the film “Saturday Night Fever.”  I am also wondering how to tell him that the best thing about that movie was the music, because I really don’t want him to see it, even though I can hardly remember anything about that film except John Travolta in that leisure suit, walking down the streets to the beat of “Stayin’ Alive” and ruling the disco like no other disco king before or since.

Angelina Jolie, her own kind of royalty, seems as if she was genetically engineered for this role:  beautiful and imposing, yet vulnerable enough that you can believe her heart can be moved.  Christopher says she was “born for the role,” and I can see what he means.  I don’t know if they did the cinematic equivalent of photoshopping her cheekbones to be even more chiseled, but she seems like an ethereal goddess on the screen.  I can’t think of anyone else in film who has a superstar visual presence the way she does–we have no other female stars other than Jolie who can evoke the response of actresses such as Vivien Leigh, Elizabeth Taylor, Grace Kelley, Sophia Loren.  They had an iconic style that seems missing from the starlets on the covers of People Magazine, all of whom seems so temporary.   Now I am not saying Angelina Jolie is Meryl Streep–but she is a star.

So my food arrives and I am getting all geared up for Angie/Maleficent to be all about getting Aurora’s hand pricked on some spinning wheel, and I am ready to gauge the evilness of her laugh to see if it is convincing, but the story is more interesting and arresting than I thought it would be.  I never thought of Maleficent as a fairy, and I was not ready for her to have a star-crossed crush on a human (named Stephan, and not that cute) who AMPUTATES her wings after slipping her a Mickey, and when that happened I got all nervous because I was busily trying to figure out if this was a figurative rape in a DISNEY movie, (those folks that also did that super popular film about a prostitute played by Julia Roberts called “Pretty Woman,” ahem), or if I was just going to tell Christopher that this was just a little wing-clipping that happens when men get all ambitious when some female is flying higher than they are.

Hey Disney:  thanks for nothing.

Anyway, it isn’t so hard to see how Angelina/Maleficent feels all betrayed and in the heat of hurt comes up with the spell for Stephan’s daughter AURORA, who is cutely played by Angelina’s own five year-old daughter Vivienne Jolie-Pitt, who is completely unfazed by Maleficent’s weirdo horns and Halloween get-up.  She actually wants to be held, thus continuing the bond between Aurora and Brangelina, which I wrote because all I could think about during the movie was how Stephan was not near as cute as Brad Pitt, and how it was pretty inconceivable that Angie would have a crush on him, but then I remembered Billy Bob Thornton, and then I realized Brad could not be in this movie with all those kids they have, and you know I really am no good for popular films because I just know too much information about these celebrities, and without even trying.  So I thought the whole time about how Maleficent probably was intended to be really evil and vengeful, but that can never work out because Angelina Jolie has done so much charity FOR THE ENTIRE WORLD that she just cannot sustain evil for that long.  See? It all bleeds together. What a mess.

But what is magnificent about this film is that during a time in our history where our kids are constantly told that Congress cannot get along, Israel and Palestinians will “never” get along, pay back is the norm, and even in school “revenge tragedy” is still prominent on most curriculums (Hamlet or Macbeth, anyone?)  the woman who could make any movie in the world stars in one in which she moves toward forgiveness even though what was done to her was unforgivable.  In this film, the young handsome prince is useless–he can’t deliver “the kiss of true love.”  But Maleficent can–and she has grown to love the child of her sworn enemy.  I know there is still revenge, a dragon, more visual pyrotechnics than any film really needs, but there is something refreshing about Hollywood, or Disney, showing the limits of revenge when in competition with love.  I am not sure if this is Disney’s message, or one influenced by Angelina Jolie, but in a dark world, there is something inspiring about someone who has been so utterly betrayed to be buoyed up by a glimmer of unexpected joy in becoming attached to the young Aurora, who is innocent in a way that mirrors the former innocence of Maleficent.

I am not saying this is a cinematic tour de force:  it’s not.  But it might be a welcome relief from summer heat, the weight of scandals, the crumblings of nations that we hoped would stand.  I don’t look to Disney movies for geopolitical analysis:  that would be insane.  But the idea that a vengeful curse doesn’t have to last forever might be the one thing that stays with you long after the theater doors have closed, long after Angelina Jolie has shed her winged costume, boarded a jet, gone back to her life as a vulnerable star in a universe of black holes, surging meteors, suns that can melt the finest of wings.