Note:  A version of this essay was originally written in August when Robin Williams died.  It was revised for publication in the Gray Matters section of the Houston Chronicle on 18 December 2014.

The Houston Chronicle version may be seen here:

Yesterday, the most trending article on Facebook was a story from People Magazine on Robin Williams and the profound loss his children still feel for his death, which happened four months ago.  Williams, known of his high-octane energy levels, seemed younger than his 63 years.  Illness had taken a toll, but in our collective imaginations, he was associated with joy, happiness, life.

People Magazine quoted his children.  It is sad to read.

“I miss him all the time,” Williams’s oldest son, Zak, 31, tells PEOPLE in this week’s cover story.

“Often I see something or if I’m watching a film, I think, ‘Oh, man, he would have appreciated this’ or ‘He would have gotten a laugh out of this.’ ”

Speaking for himself and siblings Zelda, 25, and Cody, 23, he adds, “There’s not a day that goes by that we don’t think about our dad.”

All day yesterday I had been thinking about that August, with its steamy heat, threatening clouds, violent clashes, super moons, and super stars, one of whom had fallen, and left us forever.

It wasn’t the easiest month in the world.

When the word hit that Robin Williams–so quick on his feet, so thrilling to watch as his manic humor unfolded–had died, I really could not believe it.  It sounded like a hoax, a terrible mistake, and I was just waiting for someone to post that it was all a big joke, that he was fine, making a movie, performing for the USO, hanging out with his friends.  You know:  being himself, one day after another.

That is how it is sometimes:  something is over, and you would do anything to bring it back.

Someone leaves, and you would do anything for that person to walk back through that door.

Lots of words have been written about his death, the ones that keep ringing in our ears: depression, alcoholism, drugs, bi-polar disorder, rehab, treatment, struggling.  I keep thinking about one of his last interviews in which he said he was okay with being unhappy sometimes.  I know we need these words to identify certain problems, but somehow, they still feel hollow as explanations or even contributing factors to a mystery as wide as the sea, the mystery of why one would choose death over life.  We will never really know the answer to the question “why?” and maybe that is part of why it hurts so much–silence is such meager solace when mourning a loss.

So I am no expert on mental health, but when I teach literature, it is not lost on me that some of the most brilliant minds chose to end their own lives.  Hemingway, Plath, Sexton, Woolf.  Those are just a few.  I have known someone who took his own life, and I did not see it coming.  Maybe I should have, but I didn’t.  It is a recipe for long-term regret: the not-knowing, and then it being too late.

But let me tell you this:  I had a friend tell me that last February, he thought about doing the same thing.  Things weren’t going well.  He was feeling misunderstood.  But like Robin Williams, he had all the things that might appear in the textbook definition of The American Dream:  the family, the house, the job, the car, freedom to do much of what he wanted in this world.  If you asked him what was lacking in his life, none of it was external.  In fact, you might be envious of his position in the world if you looked at it from a material point of view.  But as I said, it was February, and the storms of winter were not just outer weather.  Sometimes, you don’t have to go north to live in a cold climate.

But something happened.  A friend texted him. I don’t know what was in the text–maybe it doesn’t even matter.  But, my friend realized, I think, that he mattered, at least to someone.

Robin Williams was a gifted celebrity who was loved by the world.  But most of us aren’t big-time celebrities.

However, to someone, maybe even just one person, you might be the entire world.

I tell this story because I teach a lot of writers whose work sometimes feels like one long suicide note, and I wish the world could have staged an intervention, saved them from themselves. I think in those cases, there are signs.  There have been some pretty harsh articles about Williams and how he “had a choice,” and there is truth to that. But I also think of novelist Richard Ford’s wistful line: “Sometimes choices don’t feel like choices.” You have to have a lot of imagination and empathy to be able to wrap your mind around what that might feel like.

And if you are the person left behind, you already know what is one of the big problems with suicide:  you might have done everything differently, but your own personal Virginia Woolf might have just taken a bunch of pills right after you had saved her from drowning in the river, taking the stones out of her pockets, asking her why she would do such a thing.  It is a tough call:  you don’t want to romanticize the drama of suicide, you don’t want to make it sound like something even vaguely “normal” that highly creative minds are susceptible to, but on the other hand, it is difficult to harden your heart too much against a person whose despair, grief, or depression was so overwhelming that he or she felt that death was the only release from whatever demons or pain they were facing.

So we have drugs, we have shrinks, we have public service announcements, but we still lose many people to this terrible kind of death every year, and it crosses class, gender, race, geography–you name it–it does not exclude either in its presence or its aftermath. We have religion and faith, and this can be a powerful source of strength.

But my heart still goes out to the Pastor Rick Warren, such a powerful voice for faith, whose son also took his own life.  The losses can hit any family, and they are so profound.

We still have a lot to learn, a lot to do.  This picture keeps going around the internet–I have posted it myself–it is a way for people to cope and try to help after something terrible has happened: 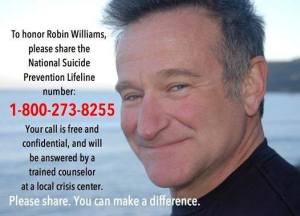 I hope it helps, I really do.

But it seems like this death could be a big wake up call that we need to save each other, a little bit, every day.  It is not lost on me that great artists, with their scintillating minds, and the biggest imaginations, often have a blind spot regarding the most important decision that they can possibly make.  At this one juncture, they cannot imagine another way, another path, another laugh, another kiss that will only happen if they choose life, one more day, one more chance.  How can this happen?  How is it that the most creative minds can create and create and create, only to hasten death and break our hearts?

Maybe our best artists do feel “in lone splendor hung aloft the night/ And watching,” when we should have been making them feel human, and necessary, and not superstars, who are always remote, far away, unreal.  So much better to be “Awake…in a sweet unrest,” than gone forever.  Better for imperfection to be our paradise, and live.  Maybe we should say this every day, until it really means something.  Sometimes things are a mess, we are in trouble, we feel hopeless, but we need to rescue our belief in the miracle. It doesn’t have to be the parting of the Red Sea.  It could be the miracle of having someone laugh at something you said, and you realize that being alive is thrilling, even in the thick of the most frightening storm.

I don’t have the answers to this–suicides and smaller deaths (love dies, happiness wanes) happen every day.  But maybe our new normal should be to affirm life at every turn, make sure when someone walks out that door, that they know that we want them to come back, no matter what, and find a way to deromanticize our notions of oblivion that make someone think that only one more breath will be enough.