A Great and Paradoxical Wonder

One of my favorite Christmas carols is “A Great and Mighty Wonder.” It’s sung to the tune “Es ist ein Ros entsprungen” (“Lo How a Rose E’er Blooming”) although the words to the latter hymn originated much later than those of “A Great and Mighty Wonder.” The earlier hymn is derived from a Greek text attributed to St. Germanus I of Constantinople (ca. 634-740) or to St. Anatolius of Constantinople (5th c.): “Μέγα καί παράδοξον θαῦμα,” or, transliterated, “Mega kai paradoxon thauma.” The full text is below, but it’s that third word, paradoxon, which interests me most, and which unfortunately has been replaced by the rather dull word “mighty” in John M. Neale’s 1862 English translation.

I’m not a theologian or a Greek scholar, but I know a little about paradox. As a rhetorical term, it indicates a turn to the unexpected. It’s not a logical contradiction, but an apparent contradiction. Not an inconsistency, but a seeming incongruity. If there’s something truly contrarian in a paradox, it’s a truth contrary to received opinion, not to possibility or reason.

Necessary Digression: Henry Liddell of the Liddell-Scott Greek-English lexicons was the father of the Alice who inspired Alice in Wonderland, itself a realm of paradoxes and curiosities.

παράδοξος was also a title applied to distinguished athletes, musicians, and artists: the Admirable. In this sense it includes an invitation to look at and wonder about some person or creative act. Mira! Come and See! Behold! Listen up, world! [Dare I add Hwaet?] Selah.

The Greek components para– and doxos have several meanings, but the Oxford English Dictionary entry for paradox clearly supports an etymology using παρα- [para-] as “going beyond” and δόξα [doxa] as “opinion”— once again, “after ancient Greek παρὰ δόξαν, contrary to expectation.”

I love this aspect of the Christmas story. Despite ancient prophecies pointing to the Messiah, the story of the birth of Christ is filled with paradox. Despite centuries of saying “How Long, O Lord?” the long-expected Jesus comes unexpectedly.

And the great and paradoxical wonder of Christmas is highlighted in this hymn. “The Virgin bears the Infant.” “The Word becomes Incarnate…” (itself a paradox) “…and yet remains on high” (curiouser and curiouser). “The cherubim sing anthems / To shepherds from the sky”: Surely that was contrary to expectation! “The infant… the Savior and the Lord”: How could something so helpless, so poor, so peripheral to the goings-on of a tiny town in a sulky region of the Roman empire become the “good news of great joy that will be for all the people,” the panacea of the world, “a full and holy cure”?

Forced by a government census, inevitable and inconvenient taxation, and ostensibly accidental lineage to travel miles in her third trimester, Mary gives birth in the foretold place and at the fullness of time to a son (given unto us!) who will be called the Everlasting Father. And consider this, Caesar: the government will rest on his shoulders. That’s paradox and irony. The wise men seeking a newborn king will stop by a palace first, but will find that this king’s home is homely. Paradox. At the dedication of the infant in the temple, the aged Simeon speaks the words of the Nunc Dimittis–so intimate, yet so universal. And Joseph and Mary’s response? They’ve already heard from angels, but they marvel anew at the old man’s proclamation, this mega kai paradoxon thauma.

Another reason I love this hymn is its self-conscious meta-refrain:

“Repeat the hymn again:
To God on high be glory!
And peace on earth to men!”

The older I get, the more I see the beauty of repetition and return, of joining in the rhythms of the natural and liturgical seasons, in the chorus of generations past, in patterns of praise. It’s utterly humbling to receive an invitation to be a part of this grand swell; at the same time it’s awfully bold to believe one might exhort or conduct Nature into the hymn she has already been singing long before any of us were born: “Rejoice, ye vales and mountains, / Ye oceans, clap your hands.” The predictable, expected refrain of this hymn pairs beautifully with the wondrous paradoxes that fill the verses.

This Christmas, I am reminded not just to turn from the last-minute shopping, the social engagements, the pleasant domestic chaos, and the to-do list to remember the story of Jesus’ birth. This hymn reminds me not just to remember, but to wonder. To revisit with the surprise of a first encounter. To anticipate something marvelous. To have faith in the incredible. To express gratitude to God for his inexpressible gift. To expect the long-expected unexpected, Jesus the Admirable. 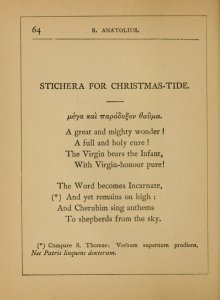 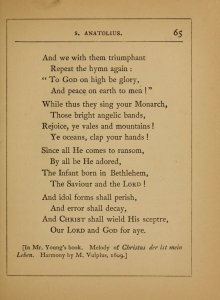 “And without controversy great is the mystery of godliness: God was manifest in the flesh, justified in the Spirit, seen of angels, preached unto the Gentiles, believed on in the world, received up into glory.”