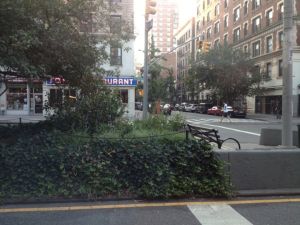 Some years ago, on a golden Manhattan morning, I stepped out of my apartment, rode the creaky wood-paneled elevator to the lobby, pushed through the entry doors of thick glass and curlicue iron, and emerged into the brilliant sunlight of a Morningside Heights spring. I strolled down West 112th Street to Broadway to get a copy of the New York Times before church. There were green leaves sparkling on the trees and rainbows of flowers skirting their trunks. There was a soft, warm breeze blowing. Were there choirs of birds singing? There must have been.

But the homeless were still homeless, even on Sunday. As I headed to the news shop there was a ragged man, too. He was more or less middle-aged, plopped on the sidewalk, surrounded by his bags, leaning back against the smudged foundation. I would have to pass a few feet from him. Best not to look his way.

But something told me to look straight at the man. He smiled cheerily back and called, “Do you know what the astronauts did when they landed on the moon?” (Well, for the first couple of hours they practiced lifting off again first, just to make sure they could. Then they emerged from the Eagle and poked about the lunar surface for another two hours, planted an American flag and some mementos to comrades who had died in an earlier space venture, tried to take a nap, and then lifted off for real after twenty-one hours.) I shook my head, pretending not to know just to hear what the man would say.

“They built a church!” he shouted.

I smiled back, passed by, bought my paper, and ambled home. Along the way I mused, “What if the astronauts had planted a church instead of a flag?” A chapel for cosmic pilgrims? Something new under the sun – a “contemplative space” indeed.

They should have done!