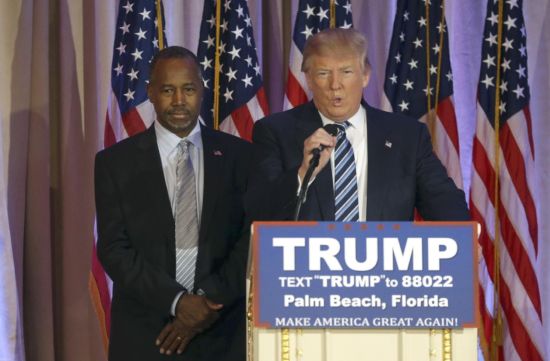 I’ve got a new post at Reformation 21 in which I dissect Ben Carson’s endorsement of Donald Trump.

I’m sure Ben Carson is a nice man, but he has fallen for Trump’s empty sales pitch, and he offers us fallacious reasons to do the same. When people try to stop Trump, it does not thwart the political process; it’s part of our political process. Trump’s lack of money from special interest groups will not ensure good decision making; in fact, it could hurt it. And President Hillary Clinton wouldn’t be the worst thing this country has experienced. It would be much worse if Americans consigned their values to the dustbin because they hope for some short-term political gain.

You can read the rest here.

The Federalist has posted an article in which I argue that Apple should resist the FBI’s request to crack open the San Bernardino iPhone. Caving to the FBI would be a blow to privacy and a blow to Americans’ freedom to conduct business as they see fit.

Over the last year or so, Apple has tried to promote itself as the champion of its customers’ privacy. They won’t track you, they won’t sell your information, and now they won’t help the government invade your privacy, either.

You can read the rest here.

The Martian is good science fiction. It has a hard-edged realism combined with a compelling plot. In the near future, NASA is sending manned missions to Mars, but the Ares III mission runs into trouble. The crew leaves behind astronaut Mark Watney, played by Matt Damon, because they think he’s dead, but Mark, who isn’t dead, decides that he doesn’t want to die on Mars. He begins working on a plan to get off the planet.

Director Ridley Scott manages to strike just the right balance of humor and tension, and Matt Damon does an excellent job giving us a hero we can root for. Damon’s got most of the screen time, and for most of his scenes he’s acting alone. Pulling off solo scenes successfully proves one’s acting mettle. The rest of the cast does a great job too (though I think an Oscar nod should go to Mackenzie Davis for imbuing a minor role with awesomeness). And let’s not forget to mention the topnotch special effects that are so good that you almost don’t notice they’re there. What a novel concept—effects that serve the story.

And it really is a good story.

END_OF_DOCUMENT_TOKEN_TO_BE_REPLACED

In the video she tells how the clinic she worked with attempted to make sure she received good samples. She claims that they did this because they knew they would get paid more.

The end of the video is particularly gruesome. The actor involved in the sting and the abortionist look at a dismembered baby and discuss how much monetary compensation the clinic should expect.

I think there are two main lessons to take away from this video. END_OF_DOCUMENT_TOKEN_TO_BE_REPLACED