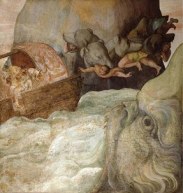 According to Greek Myth, Scylla (pronounced SIL-ah) and Charybdis (pronounced kah-RIB-dis) were monsters that inhabited opposite sides of a channel of water, sometimes imagined as the Strait of Messina separating Italy from Sicily.  Scylla, a former lover of Poseidon, had been transformed into a hideous beast by the poisoned bath salts of Poseidon’s angry wife Amphitrite.  Charybdis was a massive underwater beast, later rationalized as a whirlpool, that would drink in ocean water three times a day and spew it out again.  Sailors had to choose how to navigate the hazard.  If you sailed too close to Scylla, she would snatch 6 people from your ship, but the rest would survive.  If you went to close to Charybdis, you risked your whole ship being sucked down and destroyed.  “Caught between Scylla and Charybdis” was the ancient equivalent to our “stuck between a rock and a hard place.”  END_OF_DOCUMENT_TOKEN_TO_BE_REPLACED