Alright, it is that time of year. Yep. Halloween. A time for creepiness. Except, sometimes creepiness happens when you live near a rainforest in Malaysia…and you have a Hank Williams song in your mind while running. Talk about a weird intercultural/interspecies encounter. Perhaps the weirdest. Ever.

Do remember that I grew up in Kansas and that it is rattlesnake country. I often came across them in my front yard and the pastures when I brought the cattle in for the evening. I even encountered one on a grade school field trip to Coronado Heights in Lindsborg, Kansas, where Francisco Vásquez de Coronado gave up searching for the seven cities of gold and headed back to Mexico.

I now am known to be able to spot snakes in any hiking group before anyone else. Consequently, I have become the lead guide when in the jungle, prairies, or woods.

END_OF_DOCUMENT_TOKEN_TO_BE_REPLACED

A version of this essay appears in the 11 February 2015 edition of the Gray Matters section of The Houston Chronicle.  Today Sylvia Plath took her own life in 1963.  Here is the link:

Sylvia, you were so young. 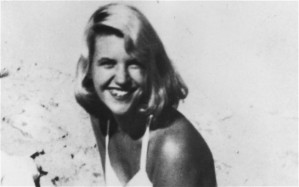 If you had lived, you might have been on a television show, with Oprah fawning all over you, cooing about your brilliant career.  You might have been a spokesperson for so many things:  surviving infidelity, channeling betrayal into art, smiling while winning awards for spinning out words.  You would have known something about multitasking. You could have helped others live Their Best Life Now, or something close to it.  You might have been an endowed chair at a university and taught whenever you felt like it.  You might have said things like “I have never felt more alive” and had a line or two about knives and lying to prove your point.

You could have written poems about your tragedies, and how they leave one reeling, but then there is a center, and it holds, and then it is flying, not reeling.  Similar, but new.  I know you loved Yeats.

Today, Lady Lazarus, you are going viral, again, pictures of you, poems, references to The Bell Jar.  You are a chameleon: pretty, happy, morbid, overwhelmed, on the verge of tears, triumphant.  Everything but old.  You sure could go for the jugular, even when everyone was saying “don’t.” END_OF_DOCUMENT_TOKEN_TO_BE_REPLACED 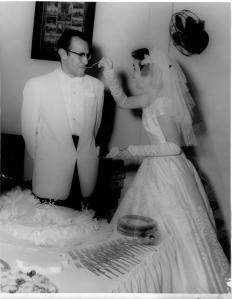 My parents at an earlier celebration.

My father died last October. My mother died in 1982, some thirty years before. For many years I have had dreams in which I have seen my mother alive. Almost always, she is alive on this earth, and she has not yet died.

Now, a few weeks ago, I dreamed of both my parents for the first time. END_OF_DOCUMENT_TOKEN_TO_BE_REPLACED

One Saturday, a few Aprils ago, Christopher and I went to Nassau Bay, Texas, a stone’s throw from NASA, so he could work his first volunteer event as a Ham Radio Operator. The 5 K run was called “The 10th Annual Race for Yuri” in honor of the famous cosmonaut.  I have to tell you, when Christopher took a course at his junior high to become a licensed ham radio operator, the one word that entered my head was “Why?”  Doesn’t the world have cell phones now?  But then there were the terrible bombs at the Boston Marathon, and when no one could text or call because everything was jammed up, the Ham Operators got things done, and there was nothing in the skies obstructing their missions.  Christopher’s teacher, Nick Lance, was a retired NASA engineer, and fantastic with the students. I admit that I was so wrong about that course.  Sometimes, it is good to be wrong.