Every Dog has Its Day: Thoughts on Gluttony 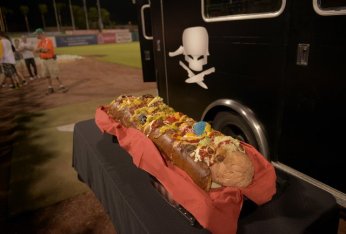 The 66lb hot dog sundae from Epic Meal Time includes chimichurri, donuts, caviar, bacon, chili, and pad Thai among other things. It is the most extreme example of the super-size-me, everything-included food culture we have become accustomed to over the past 10 to 20 years.

While I enjoy bizarre food combinations and strange cuisines (e.g. peanut butter on a cheeseburger, chicken and waffles, french fries and milkshakes, pickles with cake frosting, kimchi on chicken-fried steak etc.), I found myself disturbed (as well as disgusted) by Epic Meal’s compulsion to pour the contents of an entire grocery store on top of a frankfurter.

This got me thinking about the nature of gluttony, not only as an excess of food (both in quantity and quality), but also as the epitome of excess as an impulse across human experience. While gluttony is usually associated with eating and drinking, gluttony is not essentially a sin of ingestion. In the Summa, Thomas Aquinas explained that gluttony “denotes, not any desire of eating and drinking, but an inordinate desire.” Any inordinate desire.

C.S. Lewis depicts this in his sci-fi novel Perelandra, where Lewis strands his protagonist Ransom on the planet Venus. In his first few hours alone on the planet, Ransom eats a piece of alien fruit, only to find it to be the most delicious thing he has ever tasted. However, in the next moment he is overcome with an impulse not to eat any more:

to repeat a pleasure so intense and almost so spiritual seemed an obvious thing to do. His reason, or what we commonly take to be reason in our own world, was all in favor of tasting this miracle again … Yet something seed opposed to this ‘reason.’ It is difficult to suppose that this opposition came from desire, for what desire would turn from so much deliciousness? But for whatever cause, it appeared to him better not to taste again. Perhaps the experience had been so complete that repetition would be a vulgarity—like asking to hear the same symphony twice in a day

As he stood pondering over this and wondering how often in his life on earth he had reiterated pleasures not through desire, but in the teeth of desire and in obedience to a spurious rationalism, he noticed that the light was changing. It was darker behind him than it had been…

There is something ominous about the impending darkness here. It echoes John the Apostle’s words, “And it was night,” which he uses to allude to Judas’s treason when he fled from the Last Supper.

Also, the “vulgarity” that Lewis points to is equally startling. It is reminiscent of Peter Bruegel’s engraving Gula, which depicts the chaotic despotism of gluttony, as revelers become lost in a sea of intoxication and confused pleasure. 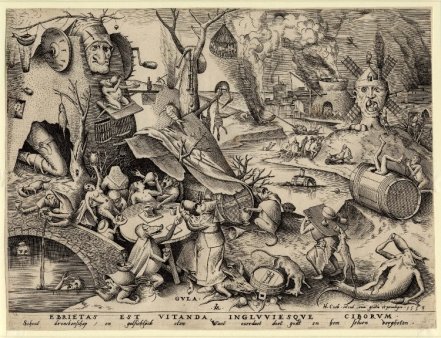 Bruegel’s painting reveals what Lewis only suggests. The nature of gluttony is to make a pleasure so sweet that it corrupts the good, beautiful and true, until it eventually unhinges us from reality.

Of course, there is nothing wrong with the fruit that Ransom eats. Quite the opposite, everything is perfectly right with it. However, its goodness can be spoiled and abused. Continuously partaking can lead to an inversion of true satisfaction. It can be twisted and fouled by the reasonable, and all-too-pervasive, inclination toward gluttony. After all, we are told, if it tastes good then eat it and the more (ingredients) the merrier!

3 responses to “Every Dog has Its Day: Thoughts on Gluttony”